While many of us know the story of how Hugh Victor McKay commissioned the gardens for the recreational use of his workers in 1909, less is shared about the many gardeners employed over the years to care for, plan, maintain and improve the Gardens.


The gardens were carefully tended to by four notable curators when it was under the management of the McKay firm. They included S.G Thompson (1909-1927), James Willan (1930-1939), Harold Gray (1939-1950) and F. Young (1950-1953). Their work in the gardens ensured that the prized Chrysanthemums and Dahlias were in bloom for the public to enjoy. By 1946, there were 7,000 Chrysanthemum plants sprouting in the gardens. Horse manure and foundry sand from the Sunshine Harvester Works were used to maintain the soil. The gardens were originally watered by a dam located in the Sunshine Harvester Works. Stony Creek provided the water for the dam.

Samuel Gadsby Thompson was born in Huntly, in the Bendigo district on 7 February 1861, to Isaac Thompson and Elizabeth Allsop.

Along with his 3 brothers and 3 sisters, Samuel accompanied his father to take up farming pursuits in the Goulburn Valley. Samuel’s father was a leading member of the Wesleyan church (similar to Methodist) and Samuel followed in his footsteps. He was precluded from becoming a Minister of the church due to deafness and instead became a long time local preacher.

In May 1889, Samuel married Emily Teresa Thomas in Bendigo, Victoria and they had two children.

When Hugh Victor McKay decided to build the Gardens for his workers in 1909, he commissioned Samuel to prepare the site. Plans were drawn up by a Mr Horsfall and Samuel spent the entire first year overseeing the filling and levelling of the site.

There is little information known about the building and landscaping of the original Gardens except that in 1910 McKay donated more land and a weatherboard church was opened on the site of the current church on 9 October 2010. We do know that by 1917, the Gardens included a pavilion for the bowling green, construction of a timber pavilion adjacent to Anderson Road, gravel walks, shrubberies, flower beds, grass plots, a bandstand and a tennis court with a small shelter. All this early work was developed under Samuel’s supervision.

From an April 1916 Sunshine Advocate article listing snippets of life in Sunshine:

The weather is beginning to give the signs of "autumn fadings" among the gardens, and the cool blast of winter is fast approaching. The curator at Sunshine (Mr S. Thompson) is renovating the beds and removing plants which have served their time, and making fresh plans for resetting seasonable decorations. The interest taken in horticulture in this district is freely commented on by visitors

Samuel continued to curate the gardens until 1927. Then in 1930 he stepped back in and was responsible for appointing the next long term curator, James Willan.

Samuel spent many years moving around Victoria and even NSW, preaching for the Wesleyan church and was in heavy demand to return to these areas for anniversaries. With his love of gardening, he was also a common donator of flowers to a selection of hospitals.

Samuel and Eliza were living in Sunshine when he died on 12 April 1938. The obituary in the Sunshine Advocate noted that for his funeral, it was very fitting that the front of the Sunshine church ‘was a mass of flowers, many of which were afterwards placed on his grave at the Footscray cemetery’. 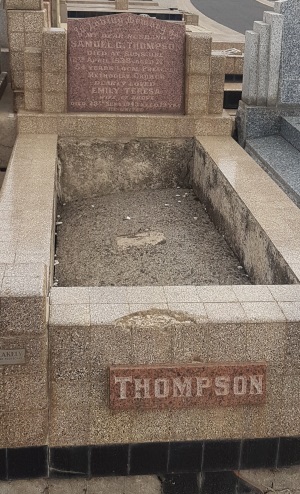 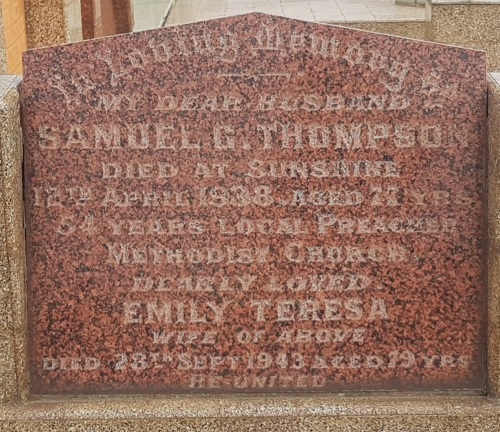 James Willan Curator 1930-39 James Willan was born on 25 Jul 1870 in Kirkby-Lancaster, Westmorland, England to Elizabeth Lancaster and John Willan. James was still living there when he married Elizabeth Ann Hodgson on 7 Sep 1892. While no dates are available, there are records of James working as a gardener for 10 years at the Army and Navy School in Wales. He was subsequently shown to have undertaken all the private gardening at Llay Place – an estate in Gresford, Wales with a stately country home, greenhouses, woodland, summerhouse, kitchen garden, pond, orchard, conservatory and pinery. 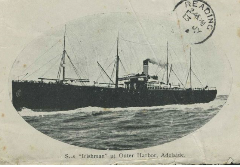 In 1912 James, Elizabeth and their 8 children set sail on the Irishman for Australia, sadly losing their youngest child, Eric, to measles during the journey. When they landed James got to work growing fruit for 5 years before returning to formal gardening when employed by Samuel McCulloch to look after the 70 acres of parklands and gardens that made up the family’s estate, Woodlands, near Stawell. After a stint running his own business in Avoca (a butchery!), James was appointed as the curator (head gardener) at the ‘Sunshine Gardens’ in 1930. He had a staff of 4-5 men at any given time and over his ten-year tenure they created beautiful floral displays in the Gardens, and also maintained hundreds and hundreds of potted plants that could be hired out for a very small price. His chrysanthemums, dahlias, roses and other flowers won many prizes at horticultural events held in Sunshine, the Melbourne Town Hall and throughout the State. An article in the Sunshine Advocate in 1934 noted “The blooms at present in flower beggar description… Mr. Willan and his staff have excelled themselves. Chrysanthemums, in some instances ten inches across, are blended in magnificent colourings—and the beautiful border plants, combined with the green carpet like lawn, make an entrancing scene.” Aside from overseeing the Gardens, James became an active member of the community, joining the Sunshine Progress Association and serving as its President for 6 years. He was also a prominent figure in local church circles, associated with the Sunshine Methodist Church as a lay preacher. James came to the rescue in 1933 when the Lady President of the Shire of Braybrook held a reception at Sunshine Town Hall for 350 ladies and the shire gardener, Mr Barlier, became ‘indisposed’. James Willan ‘practically denuded’ the Sunshine Gardens of its pot plants and foliage to create an indoor garden for the event. The Sunshine Advocate wrote “… All the ingenuity of master crafts-men in floral design had been used to decorate the hall. In the foyer tiers of pot plants met the eye, and the entrance to the hall was through an archway daintily arranged with all the flowers that bloom in the spring. Suspended from the ceiling were baskets of clustered roses, and one might well say ‘Thank God for a garden.’ …The floor in front of the stage and also the stage itself were bedecked with tiers of plants of all varieties and hues. With music being dispensed from such surroundings, and the aroma of flowers reminded one of what a fairyland might be”. 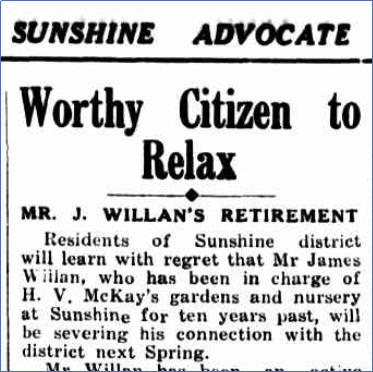 James retired after the winter of 1940 at the age of 70. While a newspaper article about his retirement mentioned a plan to move to a new home built in Chelsea, James and Eliza continue to appear on electoral roles living at 8 Kororoit Street in what is now Albion. James died on 2 Jan 1955 and is buried in Footscray Cemetery, in what is now Yarraville. 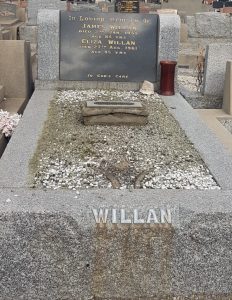 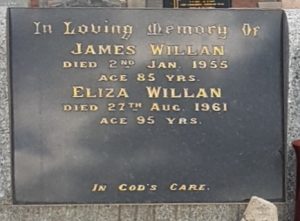